This section describes how to install Kaa by downloading an installation package, as opposed to building Kaa from source.

Kaa supports the following operation system families and provides an installation package for each of them.

To use Kaa, your system must meet the following minimum system requirements.

Kaa requires the following third party components to be installed and configured.

To configure an SQL database, edit /usr/lib/kaa-$component/conf/dao.properties where $component is control and operations.

To switch between NoSQL databases, edit the nosql_db_provider_name parameter in /usr/lib/kaa-$component/conf/dao.properties.

SMTP properties are used to send emails to newly created users with the information about their passwords, as well as other notifications.

By default, SMTP properties are not configured for Admin UI. To configure Admin UI to target your SMTP server, proceed as follows:

This section provides information on Kaa components log files location and their configuration.

The following table provides information on what ports must be open for a single node setup and a cluster setup when the nodes are protected with a firewall.

We assume that Oracle JDK is already installed.

You can check if Oracle JDK is installed by executing the following command:

As a result, you will receive the JDK version if it is installed.

We assume that the Postgresql and MongoDB servers are already installed.

The following command checks if the default database ports 5432 (postgresql) and 27017 (mongodb) are listening on network interfaces. If you have other ports configured for this purpose, replace 5432 and/or 27017 with your own ports.

As a result, you will receive a list of interfaces with the corresponding ports.

The following procedure describes how to set a password for the default postgres user and create the Kaa database. If the password has already been set you can skip this procedure.

In case your postgresql server is installed on a separate node, you should bind it to the external ip/host (update the postgresql.conf file) and grant access for client hosts (update the pg_hba.conf file).

This section provides information on Kaa ecosystem setup on a single node. It means that all Kaa and third party components have to be installed on the same node.

The instructions in this section are based on the following assumptions.

By default, Kaa components are configured to bind onto the local host. Thus, to connect to these components from endpoint applications, you need to reconfigure them for using an external IP or host name, (in our case, it's 192.168.10.172). For this purpose, perform the following steps.

By default, Kaa components are configured in such a way that they are connected to databases on the local host with the default credentials. Execute the following steps to reconfigure the connection.

In the following example, we left the default values in the database configuration file.

To activate the introduced changes, you should restart the Kaa components as follows:

After restarting all the components, you can access Admin UI at the app_base_url specified during the single node networking configuration.

This section provides information on the Kaa cluster setup process and Kaa nodes configuration. It is assumed that you are using MongoDB as a NoSQL database for Kaa.

Let's consider a Kaa cluster example with five nodes as in the following picture. 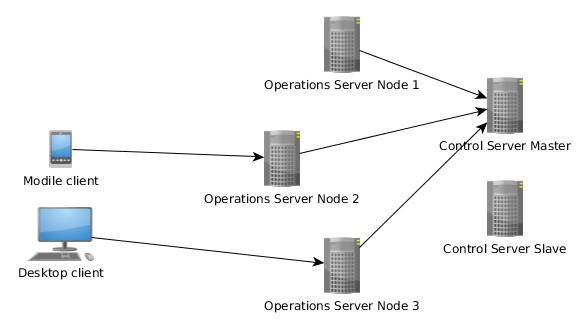 The following table provides general information on Kaa cluster nodes from our example. We use the following range of private IP addresses: 192.168.10.172 - 192.168.10.176. In your own configuration these addresses may be different.

The Operations and Bootstrap servers will be installed on the remaining three nodes. 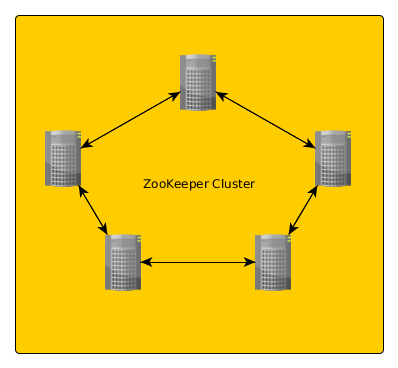 By default, Kaa components are configured to bind onto the local host. For a cluster configuration, you need to replace your default host parameters to external ones.

For this purpose, for both Control servers, replace the network parameters for the Control server and Admin UI components with the corresponding IPs: 192.168.10.172/192.168.10.173. To achieve this, proceed as follows:

For the MongoDB we decided to use the MongoDB Sharded Cluster instead of a single node database. Therefore, we installed MongoDB Config Servers on the Control Server Master, Control Server Slave, and Operations Server Node 1 nodes (one server per node) and MongoDB Routing Server on each node of the Kaa cluster. You can find more detailed information on shared clusters on the official site: Sharded Cluster.

To set the MongoDB configuration, execute the following steps.

To activate your changes, restart the Kaa-Admin component as follows:

Use the following guides and references to make the most of Kaa.