The Kaa Configuration subsystem is responsible for configuring endpoints by supplying them with the structured data of user-defined complexity that is managed via the Kaa server. The fact that Kaa operates with the uniformly structured data deserves a special emphasis. By knowing the data structure of the application, Kaa provides a number of very useful features, such as:

Once a new configuration schema is loaded into the Kaa application, the Control server automatically assigns a version number to the schema, generates three corresponding derivative schemas (a base schema, override schema, and protocol schema), and populates configuration data in the "all" group with the default values. 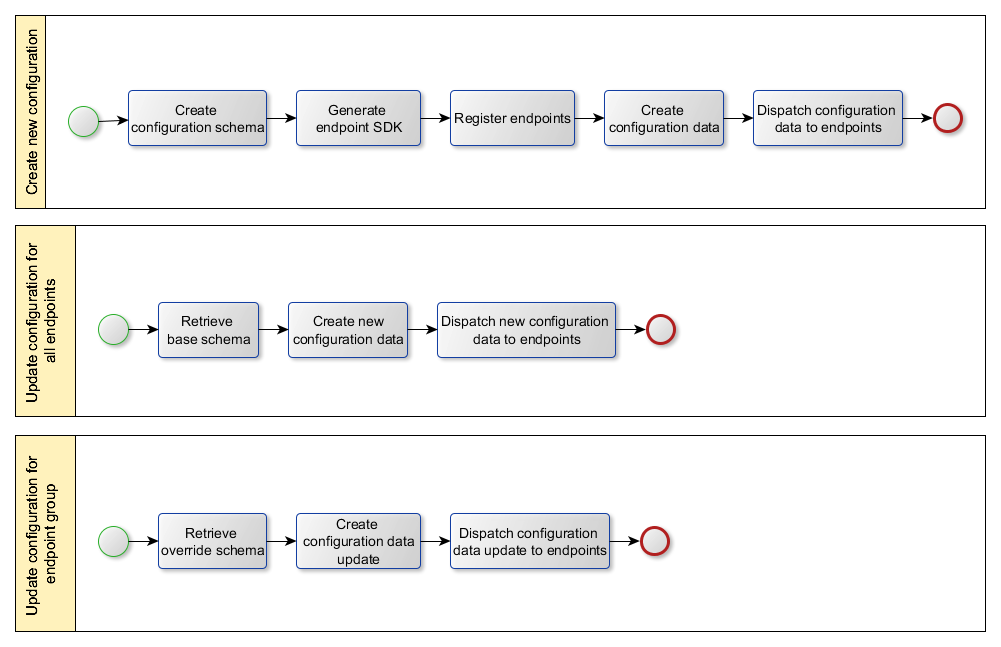 The format of the configuration schema is similar to the profile schema and based on the Apache Avro schema. The Kaa Configuration subsystem supports all of the Avro primitive types: null, boolean, int, long, float, double, bytes, string, and most of the complex types: record, enum, array, union, and fixed.

NOTE:
The Avro map type (a set of <key, value> pairs) is not currently supported.
It is possible to define an array of unions, but Kaa expects all of the entities to be of the same type.

The following examples illustrate basic constituents of the configuration schema and their usage.

The field address is formed by appending the field name to the containing record address and using the slash ("/") as a separator. The address of the root record is always "/".

The following fields are addressable in the provided schema.

However, the fields within the instances of org.kaaproject.sample.nestedRecordT contained in /arrayOfRecords are not addressable, because it is not possible to address records within arrays in the current Kaa version.

This schema would default to the following record.

The Kaa server stores the auto-generated default records in a cache and re-uses them in further operation.

The base schema is obtained by transforming the configuration schema, as follows:

The Kaa Control server exposes API for loading configuration data into the "all" group. To introduce the configuration update, the new data set must be supplied in the Avro binary or Avro JSON format and correspond to the base schema version specified in the API call. As a result, all the endpoints under the application will assume the new configuration.

The following rules apply during the update:

UUID validation is performed in the following two cases: updating an existing object or creating a new object.

The following rules apply for the object update.

As an example, consider how mandatory and optional fields are converted from the configuration schema to the override schema.

Loading the override data into the endpoint groups is similar to loading base data into group "all". Among other parameters, the group ID must be passed to the API call to indicate the group to which the new data should be applied. The loading algorithm processes the record UUID values identically to how it is done for the "all" group, persisting the UUID values that already existed in the previous version of the data in the processed group. Loading is done for the group in question independently of any other groups and without any cross-group data lookups.

To define and apply the resulting configuration update for the endpoint, the Operations server proceeds as follows:

NOTE:
In case of the arrays, the overrideStrategy field in the configuration schema defines the way in which the arrays are merged.
Record UUID fields never change from the values in the lowest weight group they were first encountered in.
Both profile schema and configuration schema versions the endpoint supports are taken into account during the merge.

By delivering configuration deltas instead of full configuration sets each time the endpoint needs to be reconfigured, the Kaa server significantly reduces a traffic load in the available data channels.

Data consistency is ensured by the hash comparison between the endpoint and the server.

The updates may carry either a full set of data (full sync) or a partial update (configuration delta). Full sync is used in exceptional situations (e.g., a hash mismatch), with the corresponding protocol schema being very similar to the base schema.

The schema generator performs the following transformations to convert the configuration schema to the protocol schema.

As an example, consider transformation of the following record.

The delta calculation algorithm is executed by the Operations server to discover and represent via the protocol schema the difference between the newly required configuration and the current one in regard to the specific endpoint. This difference is represented according to the corresponding protocol schema and then supplied to the endpoint as the delta configuration data (other accepted terms for which are delta, delta update, delta record). Note that both configurations should conform to the same configuration schema version.

The described traversal method works for all addressable fields in the configuration. However, items in the arrays are not addressable, therefore Kaa employs special handling logic for calculating deltas for the array fields, as follows:

As an example, consider the following configuration schema.

In the scope of the example, let's assume that the Operations server needs to calculate the delta between the following two configuration sets.

Compared to the current endpoint configuration, the new configuration on the server has the following differences.

The calculated delta update will be an array with three entries, as follows:

In the current Kaa version, any configuration schema updates require updates of the client application.

The endpoints report their supported configuration data schema version in the service profile. The Kaa server, in response, supplies them with the data updates that correspond to the reported version.